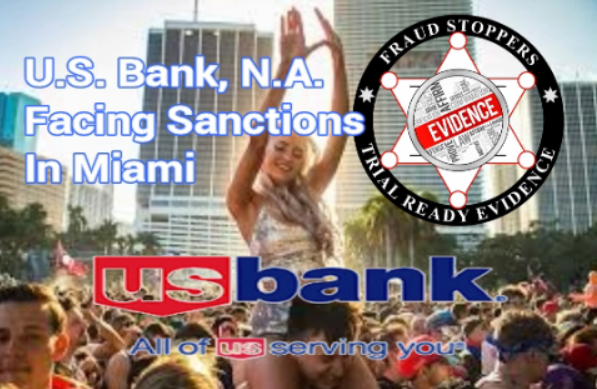 “It’s unusual that we’re in this position, but it’s unusual that any bank would dare do what they’re doing and think they are above the law like this.” – Bruce Jacobs, Miami Foreclosure Defense Lawyer.

Kudos to Jacobs for doing some real lawyering. It is all in the details. Just assume they don’t have the goods and keep asking for them. The banks have no choice but to try to wear down the foreclosure defense lawyer which has obviously blown up in their face when confronted by Bruce Jacobs, Esq. When that fails the bank is stuck and the judge gets to treat the case as something unique instead of a threat against the entire financial system. And when that happens, U.S. Bank gets hit with sanctions and fees. Of course they don’t pay it. That is all taken care of through a string of servicers who are acting on orders of an investment bank.

This the most recent in a long string of cases in which U.S. Bank has been named as violating a court order that it turn over documents.

The truth is that it wasn’t really U.S. Bank who sued, U.S. Bank is not really a party, and U.S. bank has no documents because it isn’t really a trustee; and there really isn’t a trust or any other entity in the chain claimed by the foreclosure mill lawyers that owns the debt, note or mortgage.

And the note most likely, in accordance with industry standards (as admitted by the Florida Bankers Association in a filing with the Florida Supreme Court) the original note has long since been destroyed (shredded). The industry “standard” is rely on images; which is to say that the industry standard is to violate existing statutory and common law.

The problem is how the Bank can tell the court the truth without getting thrown in jail. Some years back U.S. Bank was ordered to pay $100,000 in sanctions after the attorney admitted he had no contact with U.S. Bank and that he could find no retainer or other correspondence indicating that U.S. bank had hired him or his firm. He was just following the orders of the “servicer” whose authority was claimed from a trust that didn’t exist with “investors” who in fact had no right, title or interest to the debt, note or mortgage.

The bottom line is that neither the “Trustee” nor the “Servicer” has any right to collect or enforce. And in fact the Trustee never collects any money in any transaction. This is because the “Trust” doesn’t own the debt and therefore doesn’t own the mortgage. So the foreclosure fails.

And this is as it should be; under laws that have developed over centuries only the owner of the debt can foreclose on property. The Owner(s) of the debt, the party with the actual risk of loss is/are out in cyberspace having purchased that risk of loss from the investment bank who once had the risk of loss when the loan was originated or acquired. But the business model was to either jettison that risk within 30 days or to sell forward on the contracts and thus avoid the risk altogether.

Unless there is proof that the money proceeds from a foreclosure sale actually get paid to the bearers of the risk of loss there is no reason to give any money or any house to the players who are at present getting free houses. And THAT is why homeowners win cases: their lawyers know that the documentation that would show an actual chain of ownership and administration is completely absent. So they keep asking for it and at trial they attack the evidence as lacking in foundation. When the judge sustains their objections, they know they are winning the case.