The damning 2004 report that Wells Fargo chose to ignore 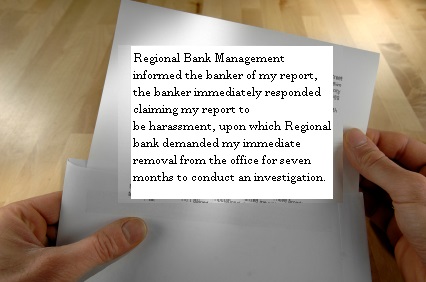 Dear Sir, I sincerely regret the circumstances under which I am corresponding, Nine months ago, I reported unethical (and illegal) activity to Wells Fargo Regional Bank, Regional Bank Management informed the banker of my report, the banker immediately responded claiming my report to be harassment, upon which Regional bank demanded my immediate removal from the office for seven months to conduct an investigation.

The activity reported directly violates established, written Wells Fargo policy and is conducted under fraudulent pretense for the sole and singular purpose of acquiring sales and bonus compensation, a direct violation of Wells Fargo?s Sales and Ethics policies. At no point has Wells Fargo Bank earned revenue or do our customers receive bene?t from these activities. In Northern California?s Greater Bay Region the activity is widespread and so highly encouraged that it has become a normal sales practice. Le? unchecked, the inevitable outcome shall be one of professional and reputational damage, consumer fraud and shareholder lawsuits, coupled by regulatory sanctions.

All attempts to utilize traditional channels to report this information have been met with immediate and lasting retaliation and having exhausted all other options, I am forwarding this information directly to the audit committee as a ?nal hope for internal resolution. I consider myself to be a loyal and devoted employee. I have been a team member since 1992, the last l2 consecutive years spent in one store. It is unconscionable to allow the routine deception and fraudulent exploitation of our clients, a belief which was ingrained upon me by Wells Fargo. At great personal cost, I also believed in the strident promises of professionalism, con?dentiality, fair consideration and absolute protection against retaliation. Despite having been slandered, publicly discredited and effectively blacklisted, have remained loyal to Wells Fargo, taking only actions requisite to protecting my career. I have not engaged a lawyer to sue Wells Fargo, disclosed details to colleagues, to the media, to the public nor made a single demand. I have simply asked to be made whole. My intention to avoid litigation and public spectacle has seemingly been interpreted as weakness rather than a loyalty to Wells Fargo; what I have reported is accurate and public disclosure can only damage shareholder value and endanger the livelihoods of 150,000 team members. Inexorably,

Regional Bank has drawn me down this path, without reason and complete ?at: ?Employment is At- Will: staffing decisions are under the complete and arbitrary discretion of Regional Bank, We have not retaliated, you will not be reinstated. If OSHA determines we have retaliated, you will not be reinstated; you will never be allowed back in the same o?ice, sue us if you disagree.? This is an imprudent position and clearly an attempt to escape individual accountability with inside the shield of a ?flawless? bureaucracy. To openly invite a lawsuit, prefaced by outside government investigation, wherein guilt is statutorily de?ned in absolutes rather than gradients even more imprudent, in that I have labored to remain open to any frank and candid discussion. I remain committed and loyal to Wells Fargo;

I am not a traitor, I am not impetuous, I am not some hyper- malcontent. I want what is right, what is best and what is fair for Wells Fargo, for our customers and for myself It is my hope that this information will be fairly evaluated without vested interest, concerned with protecting the integrity and values of Wells Fargo and it?s customers. Seemingly if our aims are identical, any differences which may have existed should no longer, and any remaining issues should be easily resolved, but the evidence thus far suggests this would be optimism to the point of foolishness.

An internal Wells Fargo report prepared 12 years ago — in August 2004 — eerily foretold the fake account scandal that has recently shaken Wells Fargo to its core.

That investigation, titled “Gaming,” warned that Wells Fargo employees had an “incentive to cheat” that was “based on the fear of losing their jobs.” It said that workers felt they couldn’t meet the bank’s unrealistic sales goals “without gaming the system.”

The 2004 report was sent to Wells Fargo’s chief auditor, HR personnel and others. The Wells Fargo (WFC) task force even cautioned that the bank faced “reputational risks” with customers and recommended management consider eliminating the sales goals.

But, like other warnings, this 2004 report fell on deaf ears inside Wells Fargo.

View this document on Scribd