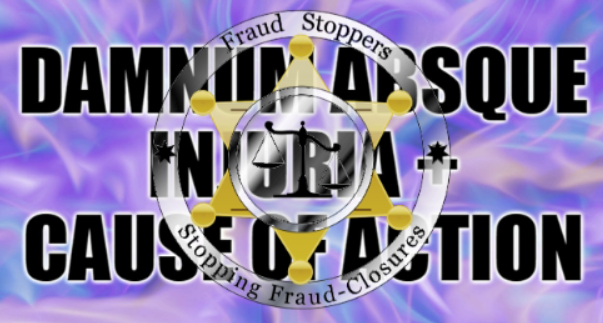 In the introduction of pleadings or memorandums of law, I often read that tens of millions of mortgage loans were sold into the secondary market. It might look like that, but nothing could be further from the truth.

I think the big trapdoor can be found in such pleadings and memoranda — this is how we end up admitting something that if true would make all errors in foreclosures damnum absque injuria. ( literally violation without harm). If the proceeds of foreclosure sales do end up getting paid to someone who carries a loan account receivable in which the money proceeds of forced sale of the house reduces the underlying obligation (because it paid the person who owned the obligation), then most defenses would be technical and not substantive.

Each time we tacitly or directly admit that this might indeed be the case we are burying ourselves or our clients. If there is a real loan receivable account and the owner of it is getting the payment because they’re losing money due to nonpayment by the homeowner then what is the harm if the connection between the named plaintiff or beneficiary and that creditor is tenuous? True it is illegal. But no harm results and that is why courts do it. And that is why regulators and lawyers stay away from it. They just don’t see any harm.

The answer is that not one security was sold that referred to or memorialized the sale of any right, title or interest in or to any underlying obligation, legal debt, note or mortgage. It never happened. The only obligation that is owed to the initial investors who purchased certificates is a promise to make scheduled payments in the sole discretion of the promisor. The obligation owed to homeowners, as investors, who so far have received nothing for starting the securities scheme in which the investment bank generated $12 for each $1 given to homeowners, is not stated or disclosed even by category.

By asserting otherwise you are admitting there is someone out there who is losing money as a result of a consumer not making a scheduled payment. No such party exists. Don’t give that up. You don’t need to be right. You only need to point to the fact that proceeding from that assumption and attacking the continuing existence of the obligation and debt, the claimants are universally unable to provide proof of payment of value for the underlying obligation as required by Article 9 §203 UCC adopted by all U.S. Jurisdictions verbatim.

Whether the obligation was actually or legally extinguished during securitization and whether or not the original transaction was in fact a loan is debatable. What is not debatable is that if one is presenting a claim, one must own it and have legal grounds to enforce it. That can be established by presumptions arising out of the apparent facial validity of documents even if those documents are fabricated and false.

But the right to test those presumptions is guaranteed by our legal system. And between you and I every time (thousands of cases) I got an order requiring compliance with discovery demands on existence, ownership and authority of the debt, I either won the case or settled it on very “favorable” terms (if you skip the fact that no money was due to the people with whom we settled).

Whether the trial courts, lawmakers and regulators have failed to properly analyze the claims of securitization is debatable. What is not debatable is that the party defending a claim for a debt must be allowed to require, with the assistance of court orders, that the claimant produce actual evidence of proof of payment of value in exchange for ownership of the underlying obligation. And what is not debatable is that lawyers who undertake the difficult and often frustrating task of representing homeowners in distress should be applauded, not attacked.