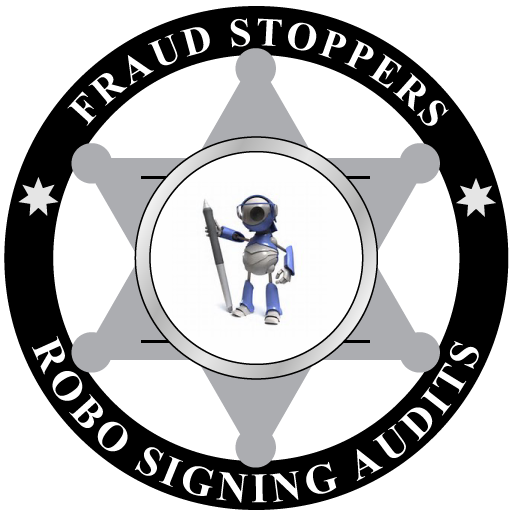 Signatures Without People: Don’t Believe the Documents: They Are Not real.

Be aware that in many cases no human hand has ever touched the documents. Nobody signed it.
Securitization was always intended to extinguish the debt without barring the ability to enforce it. This legal impossiblity has been treated as “law” for nearly 25 years.

This is increasingly true as human forgers and robosigners are no longer necessary due to technology advances and the ability of the securities brokerage firms (investment banks) to change the law to allow for electronic filing of essential documents.

Starting in the late 1990’s and ramping up between 2000-2004, documents were usually fabricated by computers and mechanical devices, based upon algorithms written by coders (the only human beings in the process) for use in computers owned and operated by companies like Black Knight, and Core Logic, who serve only the interests of investment banks without actually being in contractual privity with those securities brokerage firms.

The systems have evolved to the point where any document from certain preapproved sources, can be filed electronically without ever having been printed out or even handled by human hands. Whereas at first they were robosigned, the evolution resulted in mechanical autopens being used and now simply computer manipulation of images.

Those documents only exist in digital form, which means that can be entirely fabricated from start to finish without any human being who would or could serve as a witness to establish the legal foundation for letting such documents into the evidence record. In the electronic filing, no mechanics are involved, it is just the result of manipulation of images.

The reason the main players have gone to such lengths is that few people, if any, are willing to sign documents they know nothing about. So the system has evolved. The cause of this phenomenon is simple: there is no transaction (i.e., a real event in the real world) that the documents memorialize.
PRACTICE HINT: If you keep in mind that the process of securitization was never designed to securitize homeowner debt and never did securitize homeowner debt, things will start getting clear for you, including your next steps in your strategic plan and tactics. The securitization plan to issue securities.

That much is true. But no promise to pay given by any homeowner was ever sold to investors buying “certificates” issued in the name of REMIC trust by investment banks who were doing business in the name of those “REMIC” trusts. Securitization was always intended to extinguish the debt without barring the ability to enforce it.

Lawyers and pro se litigants should avoid any tacit or express admission that documents bearing the name of any entity were prepared by that entity or were prepared on behalf of that entity. They are all fabricated for the sole purpose of enforcing a non-existent debt. Different names are designated in order to distract litigants from the truth. It is always the investment bank (securities brokerage firm) bank acting through sham (placeholder) intermediaries. The goal is more revenue not reduction of a loan account that no longer exists.