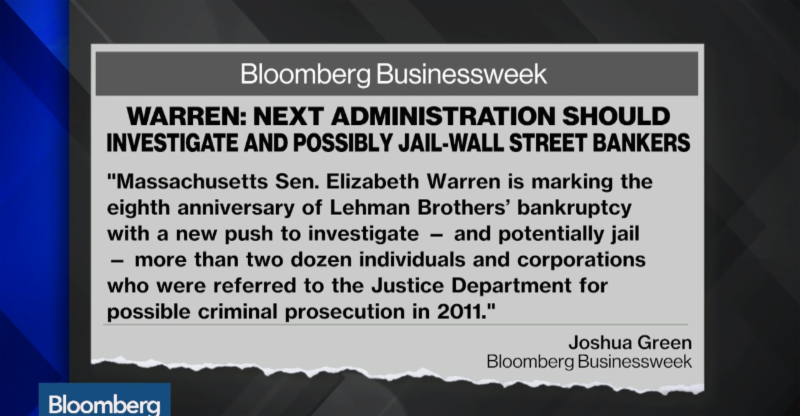 Senator Elizabeth Warren (D-MA), Member of the Senate Banking Committee and Ranking Minority Member of the Sub-Committee on Economic Policy, wrote two highly provocative letters this last week requesting a formal investigation into why President Obama’s administration has not brought criminal charges against the individuals and corporations involved in the 2007-2008 financial crisis.
According to Bloomberg, Senator Warren says that the Financial Crisis Inquiry Commission (FCIC) clearly believed there was enough evidence to prosecute them, and sent many criminal referrals to the Department of Justice, so she wants to open up investigations to better understand why that never happened.
“The Department has failed to hold the individuals and companies accountable,” she wrote. “This failure requires an explanation.” Her letter to FBI Director James Comey asked that he “release records of the FBI investigations into financial misdeeds in the wake of the crisis, to further illuminate why the Obama administration decided not to prosecute firms linked to the financial crisis.”
A three-page letter to FBI Director James Comey, and a twenty page one to DOJ Inspector General Michael Horowitz,  demanded an answer to why the Department of Justice (DOJ) has yet to prosecute any of the major players responsible for the 2008 financial crisis.
Applauding her demand for an investigation into why the referrals were not followed up, is Phil Angelides who had chaired the FCIC. “This is in the public interest,” he told Avi Asher-Shapiro of International Business Times. “We need to see if there was a fair investigation into what was happening on Wall Street.”
Read More
Regards,
Richard
Richard M. Bowen III
richard@richardmbowen.com
www.richardmbowen.com/
214- 604-5492