Research Trust Law in Your State 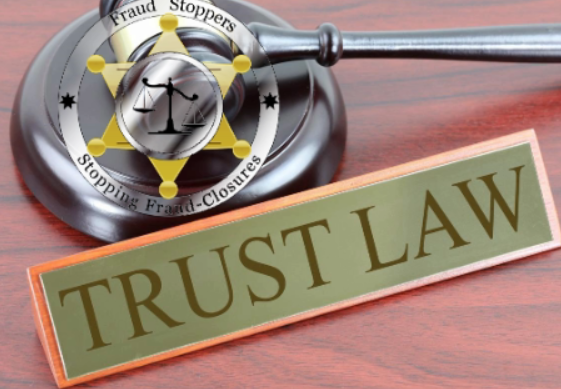 Research Trust Law in Your State: Trust officer must sign, not agent or servicer.

It’s nice to be in the position where people do research and send it to me. It seems that Florida Statutes explicitly prohibit anyone other than an authorized trust officer who works for the alleged trustee to sign any oath, affirmation or certification.

That means that no agent claiming powers from the trustee can do so. The trustees is already an agent — and by statute the only agent — who can act on behalf of the trust, unless the trust agreement is amended or modified by the consent of the beneficiaries. The trustee either accepts the fiduciary responsibility or it doesn’t. If it accepts it is bound by statute. It cannot delegate those powers and then claim reliance on an agent or third-party vendor.

This means that any Oaths, affidavits, and acknowledgments must be signed by an officer expressly authorized by action of the board of directors of such trust company, association. And that means no third-party vendors, servicers, or agents, or even powers of attorney claiming the status of “attorney in fact.”

The trustee is in effect an attorney in fact. There can be no attorney in fact for an attorney in fact — unless the trust agreement explicitly gives the right to do so, in which case the existence of the trust is at least somewhat in doubt. If it were otherwise this would allow any trustee to divest itself of fiduciary responsibility and give all power to someone unknown or even explicitly rejected by beneficiaries and the original settlor or trustor.

In fact, I think it can fairly be argued any such instrument is facially void and not facially valid. And that means that no legal presumption or assumption should be applied using the void instrument as the foundation.

And THAT leaves the foreclosure mill naked and afraid. They are done. For one thing, they have had no contact or contractual relationship with the named trustee or the trust.
Universal Citation: FL Stat § 660.35 (2012 through 2nd Reg Sess)
660.35 Oaths, affidavits, and acknowledgments.—In any case in which a trust company or the trust department of a bank or association is required to make an oath, affirmation, affidavit, or acknowledgment in connection with any fiduciary capacity in which it is acting or is preparing to act, the chair of the board of directors, the president, any vice president, any trust officer or assistant trust officer, the cashier or secretary, or any other officer expressly authorized by action of the board of directors of such trust company, association, or bank shall make, and shall subscribe if required, any such oath, affirmation, affidavit, or acknowledgment for and on behalf of such trust company, association, or bank.

(2) As a confirmation of the law in effect in this state when this part became effective, such authorization may include, without limitation, authority to:
(a) Execute stock powers or similar documents on behalf of the principal and delegate to a transfer agent or similar person the authority to register any stocks, bonds, or other securities into or out of the principal’s or nominee’s name.
(b) Convey or mortgage homestead property. However, if the principal is married, the agent may not mortgage or convey homestead property without joinder of the principal’s spouse or the spouse’s guardian. Joinder by a spouse may be accomplished by the exercise of authority in a power of attorney executed by the joining spouse, and either spouse may appoint the other as his or her agent.
(c) If such authority is specifically granted in a durable power of attorney, make all health care decisions on behalf of the principal, including, but not limited to, those set forth in chapter 765.

(4) Subject to s. 709.2202, if the subjects over which authority is granted in a power of attorney are similar or overlap, the broadest authority controls.

(6) An act performed by an agent pursuant to a power of attorney has the same effect and inures to the benefit of and binds the principal and the principal’s successors in interest as if the principal had performed the act.