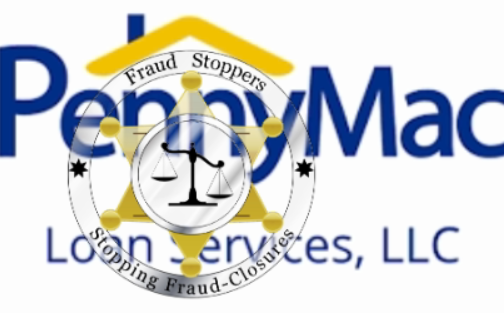 FRAUD STOPPERS is the only organization, to our knowledge, that can provide you (and your attorney) with loan level data and mortgage securitization information for all Government-Sponsored Enterprise Mortgages, including Fannie Mae, Freddie Mac, Ginnie Mae, Farmer Mac, Sallie Mae, and PennyMac. Plus all private & off shore Trusts information including World Savings Loans and Washington Mutual (WAMU) mortgages.

Get your trial ready evidence package you need to win your case and make the banks pay you to go away!

GET YOUR MORTGAGE AUDIT NOW

About that letter you receive from the company claimed to be your servicer: PennyMac

People keep getting letters and they tend to treat the information as real simply because it is in writing. That is the nub of the Wall Street scheme — send out written communication and documents without regard to the truth and people will assume that the document or letter would not have been sent if at least someone didn’t think it was true.

SO I was recently sent a copy of a communication that was on PennyMac letterhead. People forget that you can create the letterhead of any company or person and pout it at the top of your document or letter. Any reader assumes that it was sent by that person or company even if it was not sent by or on behalf of that company. And servicers like PennyMac do not send out anything that could be legally binding because they’re just figureheads.

Practically all inconsistent and nonsensical notices and statements received under the “letterhead” of some company that has been claimed by someone to be a servicer can be easily understood — if you accept the premise that multiple FINTECH companies were involved in processing every function that one would normally associate with that of a company receiving and disbursing money.

So here is the comment I made upon receipt of that “letter.” (Calling it a letter may be misleading since it is the automatic production of a document that never included any human intervention, thought, decision, or authority.)

Here are the facts, to a virtual certainty:

2. Since it is unsigned there is no presumption that any human ever authorized the letter. The failure to at least robosign it or stamp it with a signature indicates or even raises the presumption that whoever sent it meant to preserve plausible deniability.

3. The response to this letter should be a demand (QWR or DVL) for a signed authorization from PennyMAc saying that the letter was authorized by PennyMac on behalf of whoever they are saying is the creditor. Treating the letter as real makes it real and makes it difficult to challenge authority later.

4. Any demand mailed to their address should include an inquiry as to the meaning of the small font code above the address.

5. If the letterhead contains a deadline, you should fire back a question about whether this is pursuant to an instruction from an identified creditor or, if there is a self imposed deadline by someone else. If it is PennyMac, please acknowledge that the deadline is imposed by PennyMac. If it is imposed by some third party, then please identify that party and their authority to impose any terms and conditions.

6. When the letter refers to forbearance or a prior forbearance agreement, an appropriate response would be a request for acknowledgment from an identified creditor as to the existence, terms and conditions of the forbearance agreement.
1. Failure to challenge the authority of the company claiming to be a “servicer” could later be construed as tacit consent to the authority of that company and the presumption that since they are the servicer and they do have the authority, they must be representing a creditor who has purchased the underlying obligation for value.
2. Even if the legal presumption is not raised, a factual assumption will arise in the mind of any judge when faced with these tracks in the sand. You always want your alternative narrative to run parallel to the tracks laid by the Foreclosure players.

7. References to any repayment plan, modification or deferred payment should be treated the same as any reference to forbearance.

8. The person that they have designated for you to contact is most likely a temporary employee or independent contractor in a call center. This person has no knowledge and no authority to do anything. The same is true for any person designated as being in charge of “escalation.”

9. As I have stated many times before, what is needed here is not legal argument alone. In order to defeat this scheme, Consumers who think they are subject to some loan agreement should be organizing themselves and raising money for the purpose of paying a team of private investigators. These investigators will reveal facts and circumstances that are inconsistent with the documents sent to the consumer. And the investigation will reveal the stone wall behind which the Foreclosure players are hiding.