MORTGAGE ASSIGNMENTS AS EVIDENCE OF FRAUD 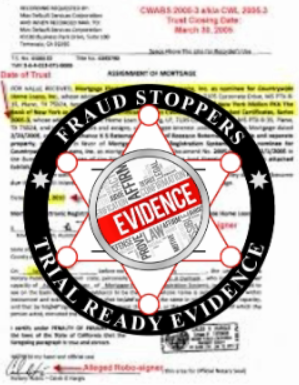 MORTGAGE ASSIGNMENTS AS EVIDENCE OF FRAUD

In the past ten years, hundreds of thousands of residential mortgages were bundled together (often in groups of about 5,000 mortgages), and investors were offered the opportunity to buy shares of each bundle. This process is called securitization.

Each such bundle of residential mortgages was given a name, such as “Soundview Home Loan Trust 2006 OPT-2.” The name indicates information about the particular trust such as the year it was created (2006) and its contents (with OPT indicating that the loans in that particular trust were originally made by Option One Mortgage).

Each such bundle/trust has a Cut Off Date identified in the trust documents (specifically, in the Pooling and Servicing Agreement). The Cut Off Date is the date on which all mortgage loans in the trust must be identified. In short, a final list of all of the mortgages in the bundle is set out. Each trust also has a Closing Date which is the date that the individual mortgages are transferred to the Trust Custodian, who must certify that for each mortgage, the custodian has a mortgage note endorsed in blank and proof that the ownership of the note has been transferred. This proof is most often an Assignment of Mortgage. Most trusts included the following or equivalent language regarding the Assignments: “Assignments of the Mortgage Loans to the Trustee (or its nominee) will not be recorded in any jurisdiction, but will be delivered to the Trustee in recordable resolved, most of these Assignments did not set forth the actual date that the Assignment took place. The Assignments were signed and notarized as if the transfer took place many years after the actual transfer date.

The Assignments were prepared by specially selected law firms and companies that specialized in providing “mortgage default services” to banks and mortgage companies. In jurisdictions with a high rate of mortgage defaults, over 80% of the filed Mortgage Assignments in the last three years were prepared and filed by the same five or six law firms and default processing companies.

In many states, two such Assignments were prepared and filed. The first was prepared in the name of Mortgage Electronic Registration Systems as “nominee” for the particular bank or mortgage company. When MERS authority to file foreclosures and Assignments was challenged in most jurisdictions, with varying results, a non-MERS Assignment was prepared as well.

In all of these cases, the Assignment was prepared to conceal the actual date that the property was acquired by the Trust. An examination of the Assignments filed showing the grantee as the Trust – such as “Soundview Home Loan Trust 2006 – OPT 2” – shows that most of these Assignments were prepared and filed in 2008 and 2009, when, in reality, the mortgages and notes were actually assigned – albeit defectively – prior to the closing date of the Trust. While the exact closing date can only be determined by looking at the trust documents, any Trust that includes the year in 2006 in its title most likelyclosed in 2006.

If a Mortgage Assignment is dated, notarized and filed in a year after the year set forth in the name of the grantee trust on the Assignment, it is actually an Assignment specially, and in many cases, fraudulently, made to facilitate foreclosures.

These Specially-Made Assignments have created havoc in the courts. In many cases, the Specially-made Assignments are dated AFTER the foreclosure action has been initiated, making it appear that the Trust somehow magically knew prior to the assignment that it would acquire the defaulting property several months after the foreclosure action was initiated.

Repeatedly, courts have asked Trustees to explain why they were acquiring non-performing loans and whether such acquisition was a violation of the trustee’s fiduciary duty to the Trust. No Trustee has ever come forth and explained that the Trust actually acquired the loan years before the Assignment. As a result, there are many decisions with observations similar to this observation made by Judge Arthur M. Schack of Kings County, New York, in HSBC Bank v. Valentin, 21 Misc. 3d 1124 [A]:

Further, according to plaintiff’s application, the default of defendants Valentin and Ruiz began with the nonpayment of principal and interest due on January 1, 2007. Yet, four months later, plaintiff HSBC was willing to take an assignment of the instant nonperforming loan. The Court wonders why HSBC would purchase a nonperforming loan, four months in arrears?

Further, the Court requires an explanation from an officer of plaintiff DEUTSCHE BANK as to why, in the middle of our national sub-prime mortgage financial crisis, DEUTSCHE BANK would purchase a non-performing loan from INDYMAC…

In Massachusetts in October, 2009, Land Court Judge Keith Long reaffirmed a March, 2009, ruling that a lender cannot begin foreclosure proceedings before the lender has filed and recorded the Assignment, stating:

The blank mortgage assignments they possessed transferred nothing…in Massachusetts, a mortgage is a conveyance of land. Nothing is conveyed unless and until it is validly conveyed. The various agreements between the securitization entities stating that each had a right to an assignment of the mortgage are not themselves an assignment and they are certainly not in recordable form. U.S. Bank National Association v. Ibanez, Massachusetts Land Court Misc. Case No. 384283, consolidated with two other cases.

Many authors expect the Massachusetts Supreme Court to reverse the Ibanez decision, but the uncertainty itself, as in the case of the MERS challenges, caused lenders to flood recording offices with new Assignments.

In cases where the Trust failed to get a valid Assignment, the problem is complicated by the bankruptcy of the major loan originators, including American Home Mortgage, Option One Mortgage, and Countrywide Home Loans.

When these big mortgage companies filed for bankruptcy, they did not disclose the mortgages already sold to the trusts as assets, because the transfers occurred months and years prior to the bankruptcy filing. Years later, when the Assignments were required for foreclosures, a bankruptcy court’s permission was needed to Assign billions of dollars in mortgages. Most likely in fear that a Bankruptcy Judge would not rubber stamp such a request, no such permission has ever been sought.

In lieu of valid Assignments, Trusts continue to rely on Assignments specially made by their own law firms and mortgage default service companies. Eventually, these fraudulent Assignments are being discovered by Courts, and the foreclosing trusts required to prove that they own the Mortgage and Note in the foreclosure action without reliance on Assignments that misrepresent the date of the actual transfer to the Trust the authority of the signers of the bankrupt original lenders. For thousands of homeowners, this realization has come too late.

Aside from the law firms and mortgage servicing companies that fraudulently produced Assignments, the entities at greatest risk that the fraudulent Assignments scheme will be exposed are the Title Companies that guaranteed the clear and correct transfer of ownership to the Trusts. Also at risk are the trust creators themselves and the Trustees. Both groups of entities have been on notice for several years that the faulty Assignments were likely to jeopardize the Trusts’ claims to ownership and ability to foreclose in the event of default, yet have failed to disclose this critical information to trust shareholders and to the SEC.