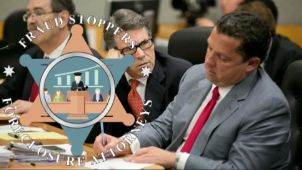 This will probably get me in plenty of hot water with lawyers. Homeowners should be winning foreclosures most of the time. The reason they don’t? — Ineffective Counsel.

Well I am rapidly coming to the conclusion that the primary basis for appeal in capital murder cases — ineffective counsel — is the real reason why homeowners think that the courts are ignoring the obvious. This is most manifest in a phenomenon I refer to as hallway trial lawyers. When they are speaking to their clients in the hallway outside the courtroom they sound great; but once inside the courtroom they are either mute or should be mute.
Hallway lawyers can be great trial lawyers — if they would only prepare and obsessively roll the issues over in their mind as they approach a hearing or filing of a motion, pleading, or brief. And they would win far more often than they would lose if they did the work. That takes two things that most people lack — other than trial lawyers — commitment and courage. Like any performer you must give it your best and accept a pie in the face occasionally.
In 45 years of litigation I have won and lost cases. Most of them I won. In hindsight I would say that virtually every loss is attributable to one factor —- lack of adequate planning, preparation and execution.
My own experience is that when I have done my job as a litigator I have consistently successfully defended foreclosure cases because there is no case. That knowledge propels to me to object, challenge and refute basic assumptions in an orderly, timely and effective way. I am clear as to the basis of my objections and challenges and how it it lacks foundation, relevance or relies upon inadmissible statements or documents. And I am relentless.
While there are judges who simply refuse to consider any possibility of a homeowner victory, many of such judges can be turned when approached correctly. They are merely starting from assumptions they are required to make. They are not against the homeowner. They are for the rule of law.
The problem is not the judges. The problem is the lawyers who walk into court believing that the loan is real, the claim is real and that they are only looking for technical ways to get their client out of a valid deal. The problem is exacerbated by magical thinking — that by pointing out bad acts by the foreclosure mill or servicer they will automatically cancel the mortgage, get quiet title and somehow the “debt” will disappear. Is it any wonder that judges are responding negatively to such assertions?
Why should any judge relieve a debtor of an obligation because of bad acts by a creditor? The answer is that they should not because if they did they would be destroying the foundation of a nation of laws. If you were owed the money then you would not think that is such a good idea either.
That is why I strive to show the truth of the transaction between the homeowner and whoever sold the transactional documents for the homeowner to sign or the truth behind the acquisition of what had been a valid loan agreement.
For the homeowner it was a loan and as soon as you admit that it was a loan, you are already in deep trouble. By admitting the loan you admit the existence of a conventional creditor and a conventional debtor. You also admit the existence of a conventional debt and you can’t contest  the non payment by the homeowner and therefore you are conceding that the homeowner is in breach of a loan agreement without excuse. Fabricating paperwork is no excuse to get out of paying a loan you received. You still owe the money.
The lawyers and homeowners who complain that this gives them no place to go are missing the essential truth of Wall Street securitization: in nearly all cases the debt was never sold. If you start with the wrong premise you will always end up with the wrong result.
The entire enterprise was about selling and reselling private financial data of homeowners who for their part were tricked into thinking they were entering a loan agreement while the other side spared no effort in avoiding the title and liability of a lender under lending laws. That is not a loan and the agreement was not a loan agreement.
More importantly, the agreement might not be enforceable at all since (a) there was no meeting of the minds and (b) there was an absence of consideration caused by the payment of consideration together with an obligation to pay it back.
For the investment banks this was solely about getting consent to sell private data and issuing sand trading securities based on the data not any debt. Anyone who does not understand the significance of that should probably not be litigating these cases. They will lose and thus contribute to the growing body of evidence that most people lose defending actions titled or labelled as foreclosures even though most people could win.
Mass joinder and mass petitions to change the mandatory requirements for filing foreclosure actions can be done with direction from licensed people who actually understand that there is neither an actual claimant nor a claim in the creation, administration, servicing or enforcement of any transactional documents in which a homeowner is one of the parties.
My opinion is that without central direction, preparation, investigation, and strategic and tactical planning by experienced trial lawyers, homeowners will continue to be food for a profitable scheme created and advanced by Wall Street.
My opinion is that this is a massive social issue as well. By finally denying Wall Street banks of profit from foreclosures and all the profitable events leading up to foreclosure, the vast inequality of power and wealth can be addressed, at least in part.
Neil F Garfield, MBA, JD, 73, is a Florida licensed attorney since 1977. He has received multiple academic and achievement awards in business and law. He is a former investment banker, securities broker, securities analyst, and financial analyst.
Spread the love
Tweet