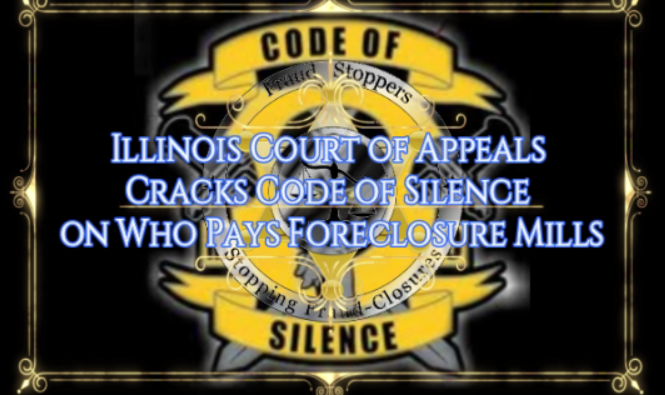 Illinois Court of Appeals Cracks Code of Silence on Who Pays Foreclosure Mills. The wording of the decision strongly suggests that whether the claimant is US Bank, Deutsch or BONY Mellon et al, the third party who is actually paying the lawyer must be disclosed — at least if the homeowner asks. Given the nature of the role that the alleged Trustee plays — i.e., none except to give the appearance of institutional involvement — this decision opens the door not only to disclosure but to possibly answering the question of who is pretending to be the creditor.

We conclude that neither attorney-client privilege nor the Rules of Professional Conduct shield the identity of Steck’s third-party client, so affirm the judgment of the trial court and remand for further proceedings.

Steck responded that he had “no invoices, evidence of payment or other like records” because he had never billed or issued statements to Beckstedt or When 2 Trade. It was in this series of e-mails that Steck first asserted that “any information [he] ha[d] about [his] clients other than When 2 Trade and Beckstedt is privileged, including their identity.” [e.s.]

plaintiffs cannot even attempt to put forward “some evidence” until they know the identity of the third party. Steck’s assertion of privilege as to his client’s identity has cut off the litigation before questions about plaintiffs’ evidentiary basis No. 1-19-0012 – 10 – could even be asked. Steck inserted the issue of attorney-client privilege into this case, and as the proponent of the privilege, he must show its application. [e.s.]

In Shatkin, the court recognized that a client’s identity is not protected by attorney-client privilege because “disclosure of the identity of an attorney’s client provides proof of the existence of the relationship, provides the opposing party with proof that his [or her] opponent is not solely a nominal party, and provides proof to the court that the client whose secret is treasured is actual flesh and blood.” (Internal quotation marks omitted.) Shatkin, 128 Ill. App. 3d at 525; see also Doe, 55 Ill. App. 3d at 814.

It follows then that requests could be made in discovery.

The first is whether the named claimant (e.g. US bank) has any retainer agreement with the foreclosure mill.  This is relevant to the issue of an award of fees in judicial foreclosure proceedings.

The third is possibly a subpoena making the same demand for discovery made to the alleged servicer and its predecessors. This is relevant to the issue of whether the named claimant is in fact the real party in interest or, as set forth in the defense narrative, is acting as a sham conduit or front for third party actors.