How to Use Hearsay Evidence to Win a Foreclosure Case 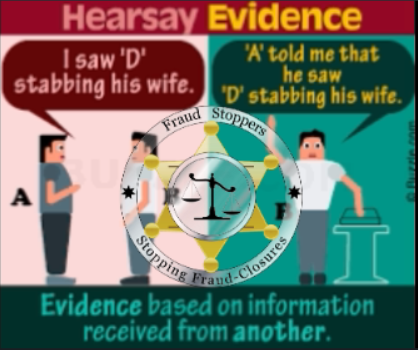 How to Use Hearsay Evidence to Win a Foreclosure Case

Below is some information on how to use Hearsay Evidence to win a foreclosure lawsuit or quiet title lawsuit, or mortgage fraud lawsuit…. Learn more about how to win a lawsuit at https://fraudstoppers.org/education

What is hearsay evidence?

The old Rules on Evidence did not define hearsay. Evidence is hearsay if the probative value is not based on the personal knowledge of a person. The knowledge is that of another person and is not a witness to the case.

Hearsay is now defined as a statement other than one made by the declarant while testifying at a trial or hearing, offered to prove the truth of the facts asserted therein. The statement may be an oral or written assertion, or a non-verbal conduct of a person, if it is intended to be an assertion. Hearsay evidence is inadmissible except as otherwise provided in the Rules…

I actually found the clearest explanation of hearsay in a plainly worded article for Panaynews.com in the Philippines by Ayin Dream D. Aplasca.

It is a very simple proposition. The Court will not allow evidence that is not presented from a credible natural person with personal knowledge of the facts in dispute and who is subject to testing before and during the trial.

What is happening in foreclosure trials across the country, and sometimes even at Summary Judgment is that testimony or affidavits are being accepted into the court record from natural breathing persons who have no personal knowledge about anything relevant to the case at bar.
Everything that is contained in their live testimony or affidavit (assuming they signed the affidavit — see robosigning) is based upon data obtained from an outside source. The witness or affiant knows nothing about the transaction with the homeowner and has never had any communication or other involvement with the homeowner starting with the origination up to the moment that such testimony or affidavit is offered.

Further, the witness or affiant is not employed by the named designated claimant in the foreclosure proceeding. Rather, he or she has been designated to testify on behalf of a company claiming to be the servicer for the named designated claimant. Usually, the witness or affiant has no other job except testifying so they actually know virtually nothing about their “employer” who frequently pays them as an independent contractor working out of their home.

And lastly, their “employer” has been party to many settlements or judgments in which lines, damages, and agreements were reached in which the employer agreed to stop fabricating false documents for foreclosure.

Only in foreclosure cases would such a person be allowed to set foot in the courtroom other than as a spectator.

With that backdrop, it is astonishing that such a witness would be allowed to testify or that their affidavit would be accepted into the court record much less used as the truth of the matters asserted. But the truth is the ignorant robo witness is accepted, their testimony does come into the record and it is relied upon by most judges as the only relevant evidence in the case.

This does not happen because judges are corrupt or biased. It happens because homeowners litigating for themselves do not know how to litigate and lawyers who represent them fail to prepare properly for hearings and trial. As an old mentor of mine once said, “Objections are not miracles that show up at trial. They are the product of preparation and strategy.”

In most cases(not all) properly framed, well-timed objections are sustained by trial judges. In most cases, any such objection that is sustained will be followed by a motion to strike the evidence that was offered by the witness who knows nothing, saw nothing, and can only testify according to a script that has been memorized.

That motion will also be granted — but only if someone asks for it. If the litigant does not ask for it, the judge is prohibited from inserting his own strategy in place of the strategy (or lack thereof) of the litigant. I have personally conducted interviews and otherwise spoken privately with people I know who serve on the bench. They are constantly amazed by what litigants allow the other side to get away with.

The obvious conclusion is that the only component of allowable evidence that is being presented in most foreclosure cases is a natural breathing person. No other elements are present.

But the way the system works if you don’t know the elements and proper timing of objections based on hearsay, foundation, leading, etc. you are probably not going to properly object when the objectionable question and answer was staged. And if you don’t know enough to ask the court to strike the objectionable answer that came out while you were objecting it stays in the record and it almost always is considered by the trier of fact.

There are two morals to this story. Stop pretending you know when you don’t. And stop pretending that you are prepared when you have not considered the crucial elements of the prima facie case and a cogent plan to undermine the ability of the opposition to establish that case against the homeowner.