Here is what is really wrong with foreclosure process 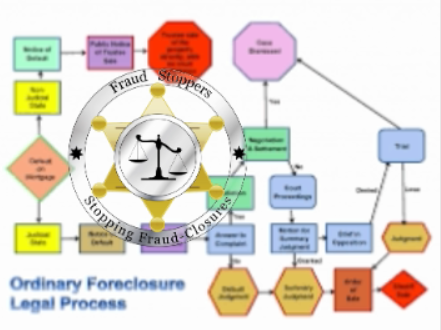 Here is what is really wrong with foreclosure process

While I agree that in most cases there was no substantive transaction with homeowners or that the transaction was not correctly identified as to its components, I do not agree that there are no mortgages or notes.

They plainly exist and even if they are not supported by consideration or are otherwise procured by fraud, duress or other illegal means, they still exist. As long as they comply with requirements for facial validity they also have legal effect until a timely and proper challenge is made by the victim.

It is inappropriate to demand that a court be omniscient or even curious beyond the facts presented. The courts are limited to those facts and implications that have been presented, not those that could or should have been presented — at the time and place where the court record was open for receipt of such information. In nearly all cases the challenge to the initial presentation is nonexistent which results in the presentation being taken as true.

The real problem here is that in virtually 100% of all cases that are won by homeowners the reason is that the case should never have been filed in the first instance. This determination only comes at the tail end of litigation instead of where it belongs — at the beginning.

And this is caused by out-dated forms and procedures that allow for implications and presumptions of fact without the claimant ever being required to allege that the Defendant homeowner breached a duty owed to the Plaintiff and suffered a loss as a result of that breach.

The law is clear. It is the forms and accepted pleadings that are not clear. The attorney should be required to assert that due diligence had been performed and an officer of the named Plaintiff should be required to assert the existence and right to administer, collect and enforce the claim, along with the date of the breach and the fact that the Plaintiff had suffered a financial loss.

As we have seen in thousands of cases settled under seal of confidentiality, such a requirement (which is applied in all civil cases except foreclosure) would result in the elimination of most foreclosure cases. Instead, judicial resources are wasted in processing illegal foreclosures lacking in any merit or foundation. And thousands of homeowners lose their homes and lifestyle to parties who are receiving foreclosure proceeds as revenue instead of restitution.

The burden for such folly falls squarely on all defendants in foreclosure and the taxpayers who are paying for thousands of foreclosure cases that would never have been filed if basic pleading requirements were enforced.

The Hidden World of Foreclosure Auctions

Post-judgment or post-sale documents can be far more revealing than anything filed before the foreclosure is allowed or allegedly completed. They often admit lack of legal standing on the part of the original party named in the foreclosure.

This phenomenon would not and could never occur if the forms allowed by courts and the government tracked the requirements of existing law that arose hundreds of years ago. It is axiomatically true that if someone has no claim they are not allowed access to the courts to try to collect money on something speculative. Every state has its own version of that in its statutes, state constitution, and cases.

Homeowners are discovering that there are a number of questionable practices in play, and they don’t like it. Recent reports out of Texas has at least one Austin homeowner complaining about the trustee turning down cash offers that could pay off the entire claim of indebtedness because of current hot housing market prices.

Why would a so-called “trustee” on a deed of trust turn down a cash offer that paid off the entire indebtedness and instead accept the credit bid of the fake creditor?

Actually, the person who first perceived this phenomenon was “Poppa” Koppa in San Diego who recognized a pattern between the amount reported by the investment bank, who didn’t own the loan, and the amount of the credit bid “on behalf of” the beneficiary under a deed of trust or the mortgagee under a mortgage deed. I wrote about it when he starting writing about it. That was in 2008.

In more than one case the transfer of the credit bid or title does not receive any consideration and we all know there wasn’t any consideration for such transfers because no payment was due.
No payment was due because either no loan account receivable was ever created or it was extinguished the moment that the transaction was sucked into the vacuum created by the now infamous securities sales scheme devised by Wall Street investment banks.
But the point in this article is that the transfer of credit bid or title (after foreclosure is allowed) is a change of parties. If it wasn’t then there would be no attempted transfer on paper. It is the simplest of logical analysis.

If the transfer of parties is recorded in a written instrument that is NOT a memorialization of some business transaction then the paper instrument is pure fantasy. In law, we call that a “legal nullity.”
All business conducted after that transfer document is executed and recorded relies on that document as the foundation for conduct after foreclosure. So the players cannot logically or legally say it doesn’t mean anything. If it didn’t mean something to them, they would not have executed and recorded the document.

The point is that such conduct is a bold admission against interest — the original party in whose name the foreclosure was filed turns out not to have been the party who was intended to receive the benefit of foreclosure.

And THAT is exactly what the homeowner was saying from the start of litigation but could not prove or could not undermine the presumptions of false facts presented to the court, to the recording office, and to the world.

Post-judgment or post-sale documents can be far more revealing than anything filed before the foreclosure is allowed or allegedly completed. They often admit lack of legal standing on the part of the original party named in the foreclosure.

This phenomenon would not and could never occur if the forms allowed by courts and the government tracked the requirements of existing law that arose hundreds of years ago. It is axiomatically true that if someone has no claim they are not allowed access to the courts to try to collect money on something speculative. Every state has its own version of that in its statutes, state constitution, and cases.

We currently use ancient forms that evolved long before anyone thought about making “Securitization” claims on transactions that were labeled as “mortgage loans.”

None of that is required. And in every case won by homeowners the most common (by far) basis for ruling for the homeowner is that the court found that foreclosure should never have been filed in the first place because it did not conform to statutory requirements.

Recognizing this phenomenon the courts and the legislatures started to require various forms of affidavits and certification but failed to require that the affiant or signatory assert the basis for personal knowledge, due diligence, and certainty that an injury has occurred to the claimant arising from the conduct of the homeowner.

And the foreclosure mills have done everything from having their own personnel to having the personnel of third-party entities execute such documents to create the basis for plausible deniability.

Meanwhile, that same foreclosure mill has no attorney-client relationship with the claimant A Bank, N.A. and is also under no duty to assert such a relationship. It is implied by the fact that the law firm filed documents in the name of the claimant.

All of this forces the homeowner to engage professionals at the great personal expenditure of time, money, and energy to undercut nonexistent claims that only survive because they display the facial validity created by pre-securitization forms and are allowed to stand despite post-foreclosure actions that show that the homeowner was right in the first place.

And this is why APON is sponsoring work on a petition to change those forms. The point is very simple and direct. If a lawyer goes to court, he MUST represent the client or implied account or else everything that transpires is void, not merely voidable.
see https://apropertyownersnetwork.org/