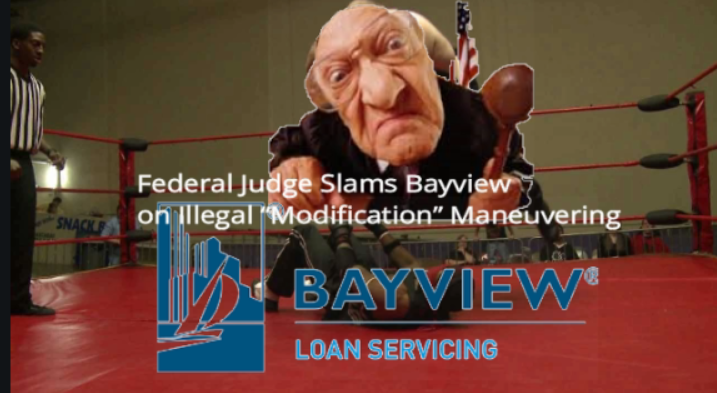 The Lesson here is that the denial of modification presents and important opportunity to challenge the practices, authority and viability of claims by parties who seek to collect, enforce or administer loans.

[This decision is dated 11/15/17. Check any future litigation or comparable decisions before using. ]

The goal is foreclosure. There can be no doubt that the modification process over the last 20 years has been largely an exercise in futility. That’s because the parties who are asserting the right to collect, enforce or administer residential loans actually have no interest in making the loan a performing loan.

And that is because they do not have any of the loans as an asset on their balance sheets. Allowing a nonperforming loan to be modified would merely preserve a stream of revenue consisting of principal, interest, insurance and taxes together with fees is attached to that revenue stream.

But a foreclosure results in the sale of the property. This produces a windfall equivalent to the sales proceeds. This windfall is distributed as revenue to all of the players who participated in the foreclosure, including at least one undisclosed player – the investment bank (or the successor investment bank) that started the scheme.

Government laws and regulators, together with public opinion, expects that modifications should be allowed in order to reflect economic realities and enable homeowners to retain home ownership. And when the performance of a loan affected the balance sheet of a lender or bank, workouts were the rule rather than the exception. Frequently the workout was a modification.

So the game plan is to create the appearance of a procedure in which homeowners can apply for settlement, workouts or modification while at the same time setting up the homeowner for failure to comply with the procedure. Failing that, the game plan calls for proceeding with the foreclosure regardless of any pending modification activity.

Attorneys are usually excused under the twisted concept of litigation immunity, which says that an attorney cannot be sued for advocating the position of his client even if the position is based on a line. In this case, the federal judge blasted both the attorney and Bayview servicing, and in the process exposed the pernicious plan that is devoted to achieving foreclosure rather than preserving the rights of a true creditor or preserving the rights of a homeowner.

However, Weisheit qualified for a HAMP modification. Bayview Loan Servicing just didn’t want to give her one and used a debunked excuse typical of a mortgage servicer.

Bayview Loan servicing explained that it denied Weinsheit’s request for a HAMP Modification because the modified monthly payment was outside the required range of 10-55% of Weisheit’s monthly gross income.

RESPA allows homeowners to appeal their modification denials. HAMP also did when it was in effect. Sherry Weisheit did exactly that. She appealed the decision with Bayview Loan Servicing.

Weisheit sent her appeal to Bayview on November 29, 2016. She notified Bayview that her monthly debt payment, in fact, would be within 10-55% of her income.  In other words, Bayview had done the math wrong.

Bayview claimed their unnamed “investor” prevented them from extending the term of the loan. The Response Letter also did not name the investor nor did it describe the nature of the investor restriction.

Bayview’s Response Letter it stated that “[w]e have enclosed all supporting documentation used to complete the review on your account.”

However, the letter did not contain any such documents. Weisheit responded to Bayview stating that she would be appealing the second denial once she had received the supporting documentation.

In this case the federal judge was able to see through the charade. The important thing is that in this decision he characterized the attorney has a tax collector who obviously was not covered by litigation privilege.

A key element of the judge’s decision was that Bayview did not dispute the accuracy of plaintiff’s calculations, “but instead of reversing course and approving plaintiff’s lost mitigation application, Bayview asserted it was bound by an open ‘investor restriction’ that prevented it from extending the term of the loan.”

The judge’s ruling specifically states that “the response letter did not name the investor nor did it describe the nature of the investor restriction, other than to say that a prevented extension of the loan term. Towards the end of Bayview’s response letter it stated that ‘we have enclosed all supporting documentation used to complete the review on your account.’ The letter however did not contain any such documents.”

In his opinion, the judge points out that “a denial ostensibly based on an investor restriction that does not name the investor or explain the restriction has been held to be insufficient. See Nash, 2017 WL 1424317.