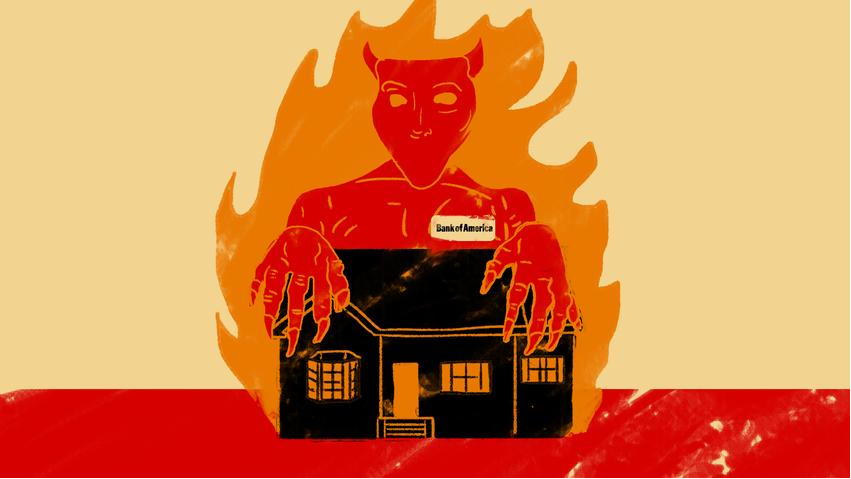 “Franz Kafka lives… he works at Bank of America.”

Judge Christopher Klein’s words kick off an incredible ruling in a federal bankruptcy court in California last week, condemning Bank of America for a long nightmare of a foreclosure against a couple named Erik and Renee Sundquist. Klein ordered BofA to pay a whopping $46 million in damages, with the bulk of the money going to consumer attorney organizations and public law schools, in hopes of ensuring these abuses never happen again—or at least making them less likely.

The ruling offers numerous lessons in the aftermath of a foreclosure crisis that destroyed millions of lives. First of all, the judge specifically cited top executives as responsible, not lower-level employees. Second, the sheer size of the fine—for just one foreclosure—is a commentary on the failure of America’s regulatory and law enforcement system to protect homeowners, despite the financial industry’s massive legal exposure.

Here are the horrific facts of the case: the Sundquists purchased a home in Lincoln, California, in 2008, but ran into financial trouble when Erik’s business faltered in the recession. Like so many others, the Sundquists were told by Bank of America’s mortgage servicing unit to deliberately miss three payments to qualify for a loan modification. Despite agonizing over ruining their perfect credit, they did so.

Inspectors contracted by the bank staked out the home, banged on the doors and tailed the family in cars, terrorizing them to keep tabs on the property.

The Sundquists eventually filed bankruptcy in June 2010, triggering an automatic stay, whereby Bank of America couldn’t foreclose until after the case concluded. But BofA sold the house anyway at a trustee sale and ordered eviction. Inspectors contracted by the bank staked out the home, banged on the doors and tailed the family in cars, terrorizing them to keep tabs on the property.

The bank didn’t correct the violation for six months, by which time the Sundquists, spooked by the constant surveillance and belief they would be evicted, moved into a rental property. Bank of America finally rescinded the sale, but that put the Sundquists back on the house’s title, which is to say on the hook for mortgage payments and maintenance fees.

By the time the Sundquists got the keys back to the home in April 2011, they found all furnishings and appliances removed and the trees dead. The homeowner’s association charged them $20,000 for the substandard landscaping. Bank of America refused to take responsibility for the damages; in fact, they were still threatening to foreclose. Interest on the loan accrued at $35,000 a year this whole time, increasing the amount due.

The couple, both world-class athletes (Renee was an Olympic–level ice skater in Italy, Erik an NCAA champion soccer player) were physically and emotionally broken by the ordeal, what Judge Klein termed “a state of battle-fatigued demoralization.” Erik attempted suicide with pills. Renee suffered a stress-related heart attack and was diagnosed with post-traumatic stress disorder. She routinely cut herself with razors as an outlet for her pain. In a journal documenting six years of this nightmare, Renee Sundquist described constant stress. “All I do is cry,” she wrote.

The Sundquists won a case in state court against Bank of America in September 2013, but the violation of the stay, the heart of the wrongful foreclosure claim, had to be decided in federal bankruptcy court. There, the Sundquists found a judge who empathized with the abuse layered upon them.

In a 107-page opinion, Judge Klein found that BofA definitively violated the automatic stay and wrongfully foreclosed on the homeowners. “Throughout, the conduct of Bank of America has been intentional,” Judge Klein wrote.

For punitive damages, Judge Klein stressed that the award had to be “sufficient to have a deterrent effect on Bank of America,” especially because of the role of top management and corporate culture in the case. The judge cited communications from the office of Bank of America’s CEO, both to the Sundquists and to the Consumer Financial Protection Bureau, the watchdog agency currently under attack by the Trump administration. After the Sundquists petitioned CFPB about the case, Judge Klein wrote that BofA lied to the agency by denying that they ever foreclosed.

“The oppression of the Sundquists cannot be chalked off to rogue employees betraying an upstanding employer,” Judge Klein wrote. “This indicates that the engine is driven by direction from senior management.” He even added that the misconduct of the CEO’s office “strayed across the civil-criminal frontier.”

This unusual candor hints at executive culpability for foreclosure fraud. “The judge signaled something very important here, which every regulator knows,” said Eric Mains, a former FDIC official who left the agency to fight his own foreclosure case. “This kind of corrupt culture can only be maintained with knowing approval from the top executives.”

After a long discussion of how to best punish BofA, Judge Klein decided to award $45 million in punitive damages, but to give them to entities that fight financial abuse, including the National Consumer Law Center, the National Association of Consumer Bankruptcy Attorneys, and five public law schools in the University of California system (UC-Berkeley, Davis, Irvine, Los Angeles, and Hastings Law School). Klein added that the Sundquists would be protected from having to pay their mortgage until BofA pays up the $46 million.

“Certainly this opinion is a shot across the bow for the bank mortgage servicing operations,” said Alan White, a law professor at City University of New York.

Check out Motherboard’s documentary about the strange, troubled fate of the smart gun in America.

In a statement, Bank of America stressed that the Sundquist loan dated back to 2010: “The processes in place at the time were subsequently modified; regrettably our performance in this particular case was unsatisfactory.” The statement from BofA added, “We believe some of the court’s rulings are unprecedented and unsupported, and we plan to appeal.”

But if one bank is ordered to pay $46 million for just one foreclosure, it begs the question of whether the federal government settled on the cheap in its more systemic investigations of America’s largest financial companies after the 2008 crash. “The governmental regulatory system has failed to protect the Sundquists,” Judge Klein wrote, and that goes double for the millions of homeowners who suffered similar fates, yet didn’t contest their cases or find a judge willing to act on their behalf.

The Obama administration responded to the foreclosure crisis by effectively letting banks off the hook with a series of settlements. Government officials have repeatedly touted these actions, even as subsequent scrutiny revealed the headline numbers to be grossly inflated or at least misleading. But if the going rate for mega-bank legal exposure is $46 million per egregious foreclosure, it’s safe to say the feds dropped the ball in a big way. And the judge’s hints of criminal culpability for top executives, not low-level paper-pushers, clarifies the enduring shame of law enforcement for failing to indict a single major executive for financial crisis-related crimes.

“This is not just an indictment of one big bank, but all of them that continue with this kind of illegal conduct with impunity and no measurable governmental oversight to stop them,” Mains said.