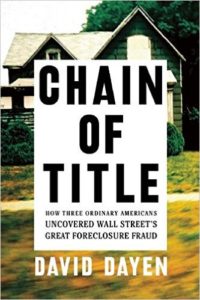 A Texas jury’s recent decision to award over $5 million in damages and fees for the fraudulent foreclosure of a single home suggests that the big banks could have been on the hook for as much as $32 trillion — before the Justice Department and state attorneys general settled for $25 billion, or less than one-tenth of a penny on the dollar.

In the trial in Harris County district court, the jury awarded Houston foreclosure victims Mary Ellen and David Wolf $5.38 million on November 6, on the grounds that Wells Fargo Bank and Carrington Mortgage Services knowingly submitted false documents to kick them out of their home.

The Wolfs had taken out a $400,000 home equity loan from Carrington (then known as New Century), which was immediately sold into a mortgage-backed trust administered by Wells Fargo. The loan was never properly placed into that trust, however, breaking the chain of title and making it impossible for Carrington or Wells Fargo to legally enforce the lien.

They put the Wolfs into foreclosure anyway, relying on a transfer document fabricated (or “robo-signed”) by Tom Croft, a New Century employee. New Century did not own the promissory note or deed of trust and could therefore not legally transfer the lien, and Croft signed off without personal knowledge of the underlying loan.

The jury agreed with the Wolfs that this made the foreclosure invalid, and awarded the family $150,000 in financial injuries, $40,000 for mental anguish, $5 million in punitive damages and $190,000 in attorney’s fees. Wells Fargo can seek a new trial, ask the judge to reduce the damages, or appeal the case, though it hasn’t done so yet.

Numerous court depositions released in 2010 revealed that robo-signing of mortgage documents in an attempt to prove ownership of loans and secure foreclosures — in other words, foreclosure fraud — was a widespread industry practice. Two years later, the five leading mortgage servicing companies, including Wells Fargo, paid $5 billion in fines and $20 billion in credits in return for federal and state prosecutors agreeing not to pursue civil charges.

With the jury award in the Wolf family case, we can now assess the true financial exposure on these banks and mortgage companies. There have been roughly 6 million foreclosures since the beginning of the financial crisis in 2008, and virtually all of them were completed with robo-signed, fabricated or fraudulent documents in one form or another. If we apply the $5.38 million jury award to all of those loans, you have a potential cost from the foreclosure fraud scandal of $32.28 trillion.

This obviously represents the extreme edge of the possible financial hit to the industry. A small number of foreclosures may have been completed properly. And while the settlement didn’t preclude individual civil lawsuits most foreclosure victims don’t have the wherewithal or fortitude for a protracted legal fight like the Wolf family did.

It’s law enforcement’s job to step in and protect the rights of vulnerable victims lacking resources. And the contrast between the penalty banks actually paid, and what they could have been put on the hook for, could not be more stark. The $25 billion National Mortgage Settlement — and calling it that is extremely generous, since banks got credit to pay off the penalty through routine activities like bulldozing blighted properties and donating homes to charity — represents roughly 0.08 percent of the total possible exposure.

That barely qualifies as a slap on the wrist for breaking the centuries-old American property rights system, and fraudulently mocking up foreclosure documents to cover it up.

Disclosure: I’ve written a book that will be released next May, Chain of Title, detailing these foreclosure fraud practices and the individuals who exposed them.