5 million families to be evicted when moratoriums end 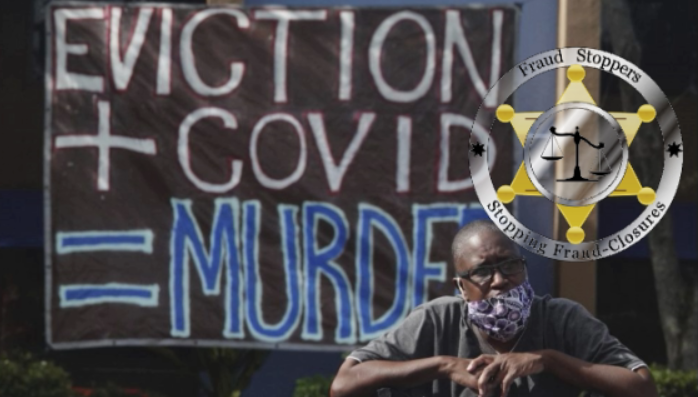 Allowing 5 million families to be evicted when moratoriums end, is not a solution. It’s problem

Allowing 5 million people to be evicted when moratoriums end, is not a solution. It’s problem.
Here is the solution for any landlord that owns rental property and any homeowner living in their homestead, where the property is subject to a recorded lien (mortgage or deed of trust).

1. Require all current servicers AND “successors” of “lenders” to prove they paid value for the underlying obligation. By that, I mean a canceled check or wire transfer confirmation.

2. For those who can produce that proof in a form and with content that can be independently confirmed, they should be allowed to continue with foreclosure. The percentage of cases in which this will be true is going to be around 1-2% of all liens, at most.

3. For those who can’t produce that proof, they have no way of legally enforcing any claim to administer, collect or enforce any presumed debt of any property owner.

4. But a simplified way of reforming the “loan agreement” to include all aspects of the deal and not just the parts that the “borrowers” and “investors” were told about, would produce settlements that could be passed on to both the property owners and the tenants.

5. Those settlements would reduce the profits of investment banks without eliminating them.

6. Losses would be incurred by the investment banks who are still holding onto trillions of dollars of illicit gains from false claims of securitization — in which securities of all types, manner, shapes, and sizes were issued under false pretenses. Some losses would be realized by investors who were fooled into these treacherous deals. [“Securitization” without the sale of assets to investors is a practical and legal nullity].

7. Practically nobody would go out of business although threats of the apocalypse will ring through the hallways of congress etc.

8. Most tenants would be able to resume payments shortly.

9. Most homeowners would restart their payment schedule under a new loan agreement settlement.

10. Not a single dollar of taxpayer money would need to be spent.

11. The result would stimulate the economy by relieving a huge amount of false debt from the economy.

12. Business activities would increase across the board.

14. The federal deficit would decline.

15. The current practice of securitization (appointing a virtual creditor) would become officially legal — as long as there was adequate disclosure along the lines required by lending statutes and securities laws and regulations.

The only way to disagree with this somewhat simple plan is to presume that the number of persons who claim to be lienholders who can presently claim ownership of the lien, debt, note, or mortgage through payment of value for the underlying obligation (see Article 9 §203 UCC), would be very high. Really? Prove it!