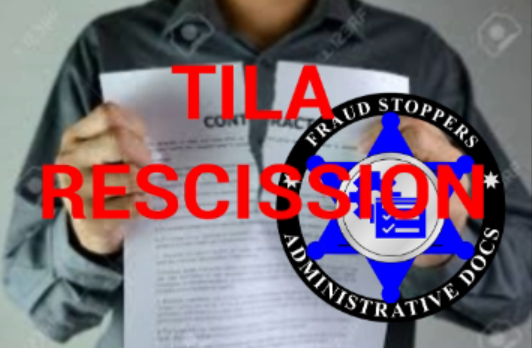 See bottom of page to get a FREE TILA Rescission Letter

I have distilled the legal points and procedure of TILA Rescission down to their essentials and specifics as you can see below. In the case presented the 9th Circuit ruled in favor of the homeowner but in so doing continued to violate the law of the land enunciated by the Supreme Court of the United States and Congress.

Astonishing. The 9th Circuit is drilling down on the premise that TILA Rescission is a claim rather than a self executing statutory event. This decision, favorable to the homeowner, not only engraves the “claim” theory in concrete, it applies a 6 year statute of limitations in Washington State.

The fact that the statute says the rescission is effective “by operation of law” is once again ignored. This may cause the Supreme Court of the United States (SCOTUS) to finally accept certiorari in cases involving TILA Rescission and to once again (See Jesinoski v Countrywide 135 S. Ct. 790, 792 (2015) scold all the lower courts for their excess in reading into the statute what is either not there at all or which is in direct contradiction to what the TILA rescission statute says. 15 U.S.C. §1635(f).

The message from SCOTUS should be clear: Just because you don’t like the result doesn’t mean you can reinvent the statute to say what you think it should have said. Both the trial court and the 9th Circuit were massively wrong, and eventually that will be made clear — but not until considerably more damage is done to American homeowners, the real estate market, our society, and the financial system generally. If you really want to see a correction to bad bank behavior this is the tool.

Had they accepted the simple wording of the statute and the wording of the SCOTUS decision in Jesinoski, the decision of the 9th Circuit would have been on target. As it is, they have muddied the waters even further.

Upon sending the required notice the claim of the creditor is changed from the note and mortgage to a claim under the statute. The note and mortgage vanish just like the debt vanishes and when the note is executed (assuming the Payee is the same party to whom the debt is owed). The purpose both the TILA Rescission statute and the merger doctrine is to to bar two claims on the same debt.

The problem that the courts have manufactured is based upon the premise of “I don’t’ like that statute.” But if the statute is to be changed it MUST be done ONLY by Congress. SCOTUS (Jesinoski) has already pronounced the TILA Rescission statute clear and unambiguous permitting no interpretation based upon any perceived “ambiguity.” The courts hands are legally tied but they continue to operate in derogation of the statute and SCOTUS.

Another Hat Tip to Mr. Garfield for this information and his work on TILA Rescission.

If you want a FREE TILA Rescission letter that gets around the supposed 3 year status of limitations register for a FREE Mortgage Fraud Analysis and Consultation Call using this intake form: